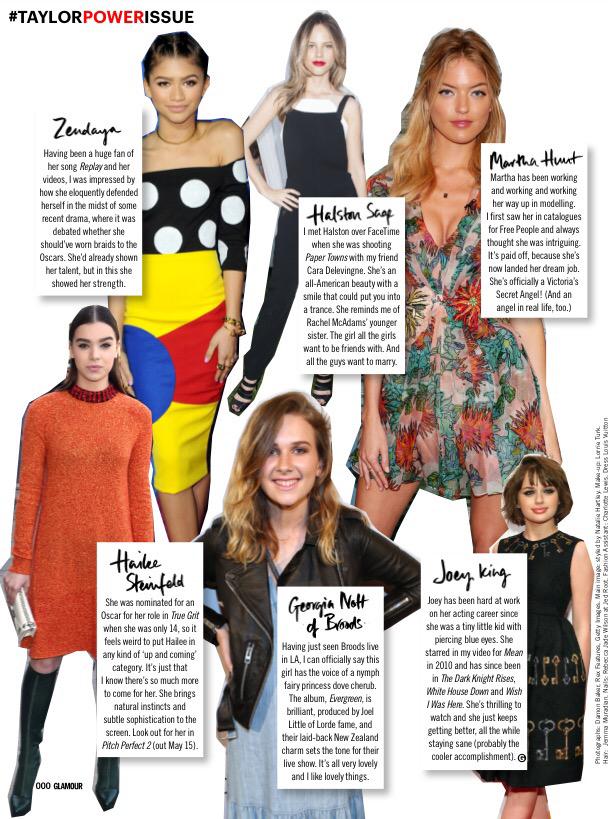 Halston is being featured in Taylor Swift’s “Women Of Tomorrow” article in her issue where she took over Glamour UK to present the world with the ultimate #TAYLORPOWERISSUE. Taylor Swift is one of the most influential power women in the whole world and she’s picked 10 “Women of Tomorrow” who excite & inspire her! Halston Sage is along side some other amazing women like Gigi Hadid, Zendaya, Joey King, her Goosebumps co-star Odeya Rush, Amandla Stenberg, Suki Waterhouse, Martha Hunt, Georgia Nott of Broods and Hailee Steinfeld. Taylor wrote a few word about each women, here’s what she had to say about Halston:

“I met Halston over FaceTime when she was shooting ‘Paper Towns’ with my friend Cara Delevingne. She’s an all-American beauty with a smile that could put you into a trance. She reminds me of Rachel McAdams’ younger sister. The girl all the girls want to be friends with. And all the guys want to marry.”

—
by Deanna
—
No comments

This site uses Akismet to reduce spam. Learn how your comment data is processed.

Welcome to iHeartHalston, your number one and most up-to-date source on all things Halston Sage! You may know Halston from her role in Fox's "The Orville" as Lt. Alara Kitan or as Lindsay in the adaptation of Lauren Oliver's "Before I Fall". Here at iHeartHalston we strive you bring you the latest news and photos about Halston and her career. Make sure to follow us on our social media for more Halston all the time! Thank you for visitng and we hope to see you again soon!

Malcom Brighthas a gift. He knows how killers think, how their minds work. Why? Back in the 1990s, his father was one of the best, a notorious serial killer called “The Surgeon.” That’s why Bright is the best criminal psychologist around; murder is the family business. He will use his twisted genius to help the NYPD solve crimes and stop killers, all while dealing with a manipulative mother, annoyingly normal sister, a homicidal father still looking to bond with his prodigal son and his own constantly evolving neuroses.

Set 400 years in the future that follows the adventures of the U.S.S. Orville, a mid-level exploratory vessel. Its crew, both human and alien, faces the wonders and dangers of outer space, while also dealing with the familiar, often humorous problems of regular people in a workplace…even though some of those people are from other planets, and the workplace is a faster-than-light spaceship.

You can find out more about which cookies we are using or switch them off in settings.

This website uses cookies so that we can provide you with the best user experience possible. Cookie information is stored in your browser and performs functions such as recognising you when you return to our website and helping our team to understand which sections of the website you find most interesting and useful.

Strictly Necessary Cookie should be enabled at all times so that we can save your preferences for cookie settings.

If you disable this cookie, we will not be able to save your preferences. This means that every time you visit this website you will need to enable or disable cookies again.