Light that enters a prism refracts to become a rainbow, its beams bent and manipulated into something that stuns. There are people who are not used to that kind of light, who see brightness as something foreign and strange. There are others who would rather the light not enter their life at all, afraid of what it might reveal. Then, there are those who invite the light in – who, despite themselves and whatever fears they may harbor, are bursting at the seams with it – and the inevitable glow that follows testifies to the strength of their character.

“Risk taking is a part of life,” actress Halston Sage says, her words as incandescent as she is. “If you never take risks, you will never know what you are capable of doing. I am a big believer in making choices in life that are true to your values and your heart. If you know that the risk you are taking is for a cause that is true to what you believe in, then even if you fail, you will not have any regrets – you can only learn from the experience.”

Read the full interview on Flaunt.com!

The Laterals interviews Halston about her career! 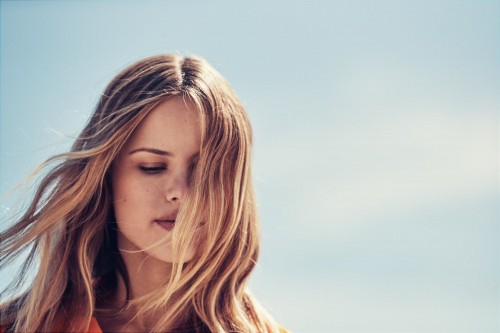 It was only six years ago when Halston Sage made her television debut. In that short time, she’s crafted a career that Hollywood dream-chasers could only aspire to. She’s landed major roles with accomplished actors and filmmakers like Seth Rogan in Neighbors, Adam Sandler in Grown Ups 2, Sofia Coppola’s The Bling Ring, and alongside Cara Delevingne in Paper Towns. Halston is famous for playing the blonde beauty, either the embodiment of virtue or audaciously cruel. The spectrum of characters in which she is casted shows her marvelous range. She brings dimension to archetypical characters with complexity and has a remarkable way of getting you to connect, whether you want to or not. From her formative days as a teen star, to more sophisticated performances in film, there is no denying that her artistry is striking.

Although relatively new to the scene, Hollywood was always within reach. Halston grew up in Los Angeles, a rare breed whose upbringing was set against a sunny backdrop of palm trees, salty air and brilliant skies. She didn’t jump into acting at an early age like many Angelenos do, but she was always a performer—finding creative outlets in her school newspaper and high school plays. Halston is an award-winning equestrian whose affection for animals is inspiring. With a personality that’s as sunny as the weather, there’s no denying her exceptional charm.

Coming from an assembly of Nickelodeon alum who’s been able to forge a career, Halston has done so seamlessly, without the overtly rebellious scandal. She has done things her way, in her own time and it shows. Halston Sage is a star without a script.

Read Halston’s Full Interview with The Laterals on their website by clicking here! 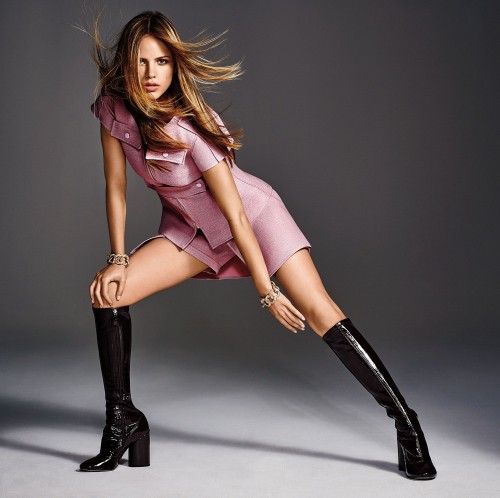 In the horror comedy Scouts Guide to the Zombie Apocalypse, out October 30, Halston Sage plays Kendall, a popular girl with a heart of gold who is described as having “clearly won the genetic lottery.” It’s a glib assessment that Sage, 22, has had to fight since she came to attention in 2014’s hit comedy Neighbors, in no small part due to an onscreen snog with costar Rose Byrne. The scene earned Sage an MTV Movie Award nomination for Best Kiss. “I’m proud of that!” Sage, who grew up in Los Angeles, says with a disarmingly nerdy chortle. “Getting to kiss Rose was a privilege. I still have a crush on her.”
Sage has been working to add substance to her bombshell roles—a struggle she has in common with Lacey Pemberton, the character she plays in the recent young-adult drama Paper Towns. Lacey, the not-so-clueless BFF of Cara Delevingne’s Margo, can’t seem to shed her ditzy reputation, despite the fact that she’s bound for the Ivy League. Sage’s surprisingly layered performance will no doubt lead to meatier roles for the actress, but for now she is donning the scream-queen crown, starring alongside Jack Black in an upcoming film adaptation of the YA Goosebumps horror books. “I’m ready to walk the streets like in Pretty Woman or get locked up in the loony bin Girl, Interrupted-style,” she insists. “I just have to be patient.”

Paper Towns Behind The Scenes Interview!

Halston Sage does not hold back on spilling secrets about her Paper Towns castmates. “We used to sing ‘Blank Space’ on set all the time,” she says of working on the road-trip adventure, the newest film adaptation of a beloved John Green novel. “John and Nat [Wolff] would kill me for saying that!” she adds with a laugh.

The bubbly 22-year-old is still recovering from the regular Taylor Swift sing-alongs and “pure fun” that came with playing Cara Delevingne’s on-screen BFF, Lacey Pemberton. Halston’s role in last year’s Neighbors (with then-rumored boyfriend Zac Efron) let her represent crazy college life; Paper Towns (shot in Charlotte, North Carolina), on the other hand, allowed her to relive high school. “The cast was together 24/7,” says the Los Angeles native. “I went to an all-girls school when I was younger, so being able to hang out with kids my age, live in an apartment building with them, and go to work with these people every day was really cool.”

From water-park antics to late-night milk shakes and sundaes at the diner, the experiences this crew shared formed a connection that’s sure to last—especially Halston’s relationship with a certain top model. “I know Cara and I are going to be lifelong friends,” she says. “Making a movie is like an accelerated version of growing up with someone. You spend so many hours a day with each other, and you’re putting your heart into this same effort.”

The best part of her performance? Bringing John Green’s words to life. “I would do a million more movies with John. He’s the coolest person I’ve ever met,” she says. We’re sure the feeling is mutual.

The former Nickelodeon star, who plays Lacey Pemberton in the film adaption of John Green’s beloved novel, talks about growing up.

CLASS ACT: The blonde beauty, whose breakout role was in Nickelodeon’s 2012 How to Rock series, started acting professionally in high school. “I would be in science class studying lines for my audition later that day, which isn’t great, but it was way more fun.”

RIDING HIGH: The actress is a champion equestrian. “It was the best thing I ever did for myself growing up. It taught me responsibility and gave me an athlete’s mentality—competitive but also appreciative of where hard work can get you. I carried that over into acting.”

BACK TO SCHOOL: Sage plays Lacey Pemberton in next month’s Paper Towns—the film adaptation of John Green’s beloved coming-of-age novel, which stars Cara Delevingne. “I went to an all-girls school, and I always felt like I missed out on a traditional high-school life. So when I was filming, it made up for that.”

HOME, SWEET HOME: “I am excited when I get a movie and I get to move somewhere for a certain amount of time. But I am a Cali girl. My family is here. The sun is here. It’s kind of hard to leave.”

—
by Deanna
—
No comments

Page 1 of 2 1 2 Next »
Welcome to iHeartHalston, your number one and most up-to-date source on all things Halston Sage! You may know Halston from her role in Fox's "The Orville" as Lt. Alara Kitan or as Lindsay in the adaptation of Lauren Oliver's "Before I Fall". Here at iHeartHalston we strive you bring you the latest news and photos about Halston and her career. Make sure to follow us on our social media for more Halston all the time! Thank you for visitng and we hope to see you again soon!

Malcom Brighthas a gift. He knows how killers think, how their minds work. Why? Back in the 1990s, his father was one of the best, a notorious serial killer called “The Surgeon.” That’s why Bright is the best criminal psychologist around; murder is the family business. He will use his twisted genius to help the NYPD solve crimes and stop killers, all while dealing with a manipulative mother, annoyingly normal sister, a homicidal father still looking to bond with his prodigal son and his own constantly evolving neuroses.

Set 400 years in the future that follows the adventures of the U.S.S. Orville, a mid-level exploratory vessel. Its crew, both human and alien, faces the wonders and dangers of outer space, while also dealing with the familiar, often humorous problems of regular people in a workplace…even though some of those people are from other planets, and the workplace is a faster-than-light spaceship.

You can find out more about which cookies we are using or switch them off in settings.

This website uses cookies so that we can provide you with the best user experience possible. Cookie information is stored in your browser and performs functions such as recognising you when you return to our website and helping our team to understand which sections of the website you find most interesting and useful.

Strictly Necessary Cookie should be enabled at all times so that we can save your preferences for cookie settings.

If you disable this cookie, we will not be able to save your preferences. This means that every time you visit this website you will need to enable or disable cookies again.